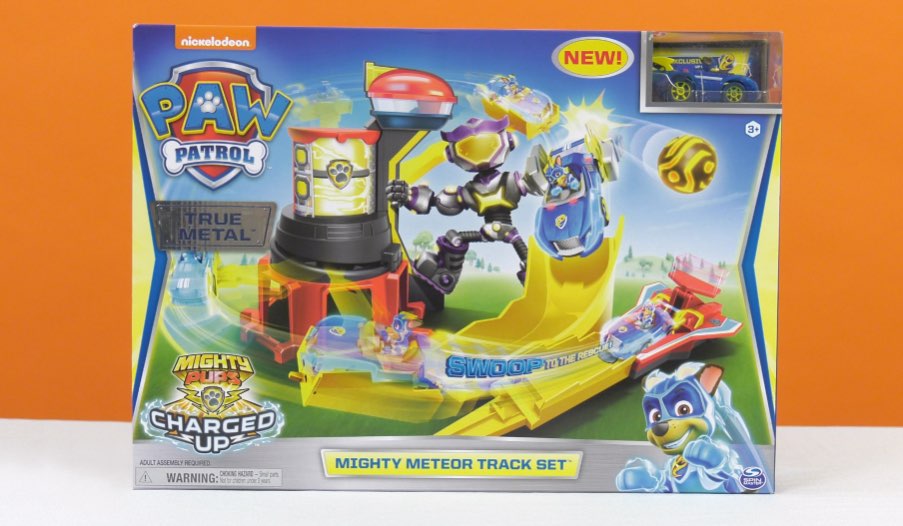 .com
Clicking buy now will open a new window and direct you to this item on target.com. Pricing and availability subject to change
an evil robot is no match for charged-up Chase

Pedal to the metal, ‘cause it’s time to charge up a PAW Patrol rescue mission! The PAW Patrol True Metal Mighty Meteor Track Set lets kids and Chase play together to defeat Harold Humdinger’s evil robot and save the Mighty Meteor. Compatible with other 1:55-scale True Metal diecast vehicles, the track set includes one charged-up character vehicle featuring Chase. Load the vehicle into the jet launcher, press the lever, and send Chase on a high-speed swoop around the track to knock the meteor right out of the robot’s hand. Detach the jet launcher and use it to soar Chase through the skies – it’s a high-flyin’ adventure! Additional True Metal diecast vehicles are sold separately, and there’s space to store six of them in the base of the track’s tower. PAW Patrol fans will love collecting a new look for Chase and playing out the action just like on the TV show.

Kids can knock the meteor out of the evil robot’s hand or remove the meteor and send Chase flying solo around the track to a downhill finish.

PAW Patrol’s nemesis, Harold Humdinger, created the evil robot, which now holds the coveted Mighty Meteor. Kids send Chase careening around the track to save the meteor… and the day!