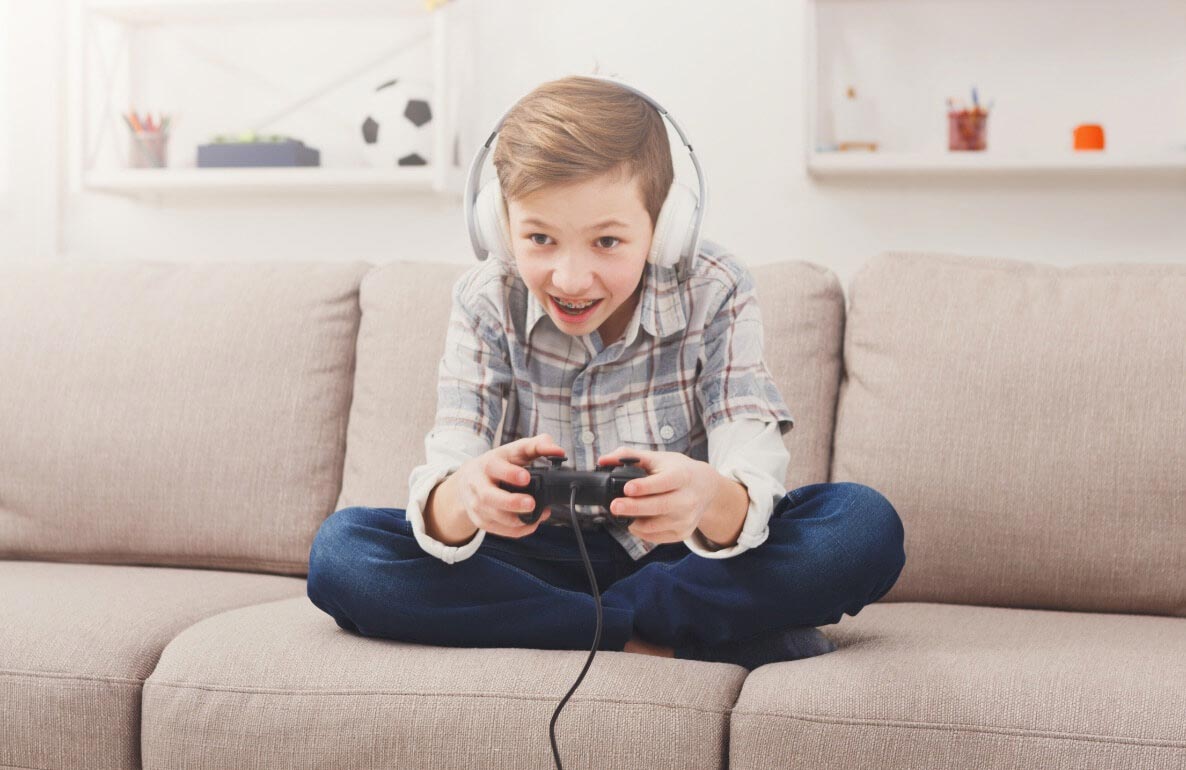 Immerse them in worlds far beyond, in dungeons deep below or in galaxies far, far away. Video games can take us out of the ordinary and plant us in the center of action at a moment’s notice! Of course, not all gamers are lookin’ for a wild ride. Some prefer an intriguing adventure story while others just wanna take some nice photos. Well, we’ve got ’em all covered! Check out the video games below and find one for the retro fans, the pixel lovers, the Pokémon catchers and everyone in-between. Relive your own youth or just give ’em full control over legendary characters in epic settings. Ready? Let’s play!

It was a time of great adventure…and danger. The Orb of Dominance corrupted the Arch-Illager and he began a reign of terror…now he must be stopped. In Minecraft Dungeons Hero Edition, players pick or create their own character then head out on an epic quest to save the land from hordes of minions and baddies. They’ll travel towns, explore dungeons and use powerful abilities to stop the Arch-Illager at all costs. Heroes will use third-person action-packed gameplay to gain more powerful tools to take creepers and enemies out. Wanna play with friends? Join the online game and take on missions together! Fans of the franchise will love the gameplay, story and overall awesome things they can do when they take control and set out on an epic adventure.

Earth is under attack and the Autobots need help taking out the Decepticons! Transformers: Battlegrounds is touted as a tactical warfare adventure game where players can assemble their favorite Autobots in a team and roll out to save the day. These battles span way beyond Earth’s reach! Players will do battle against the evil Decepticons in Central City on Earth to Cybertron, all in a stylishly cartoonish environment. Wield the power of the mighty Optimus Prime, Bumblebee, Grimlock and more in single player mode, or enter multiplayer arcade mode for action-packed fun with friends. Use the environment to attack or defend, transform between vehicle and robot and blast away with their favorites and arch enemies!

Assemble your team, do battle and become the ultimate Bakugan champion in Bakugan: Champions of Vestroia Deluxe Edition. Players will have to befriend powerful Bakugan then battle head-to-head in strategic battles to truly master their skills. There’s a 3-D world to explore, quests to complete and baddies to brawl. When they think they’ve got the perfect team, they can test their might online in head-to-head multiplayer brawls. Whether they love the anime, card game or just can’t wait to see Dragonoid Maximus tear it up, Bakugan: Champions of Vestroia Deluxe Edition is a game they’ll love.

Oh, those Skywalkers…always up to something. Somebody really should make a movie about all that dram…oh, they already have? Ahem. The LEGO Star Wars: The Skywalker Saga gives players a chance to relive all of their favorite moments from the Star Wars movie series (who knew?) as they play through Episodes I-IX as a slew of iconic characters. Win a podrace as young Anakin, learn the ways of the Force as Luke and carry on the lightsaber as Rey. They’ll travel across the galaxy far, far away, from Naboo to Dagobah and far beyond, as the story of the Skywalkers unfolds or, rather, builds to epic climaxes. Battle, laugh and take on the Empire and First Order in awesome battles that span time and space.

It’s been a long time comin’! New Pokémon Snap gives players the chance to take photos of their favorite Pokémon in their natural habitats, travel to faraway lands and build their own Pokémon Photodex. Explore beaches, jungles and more as they scour the terrain to catch Pokémon munchin’, nappin’ or in battle! Grab the camera and head out, there’s SO much to see!

We all choose our path, light or dark. In Star Wars Squadrons, players fly with the New Rupublic and the Empire in alternating missions that tell the stories of two pilots. That’s right, the Battle of Endor may have shattered the Empire, but there are still pilots fighting for the cause. Star Wars Squadrons includes single player campaign mode and five versus five multiplayer dogfights to keep players entertained long after the campaign ends. The graphics look great in a galaxy far, far away and players will love the intersecting storylines of both our hero and enemy. Which is which? It’s up for them to decide.

Crash 4: It's About Time

Rutabaga! Crash is back and lookin’ better than ever in Crash Bandicoot 4: It’s About Time! The original Playstation hero, Crash Bandicoot along with his sister Coco and Aku-Aku, have to stop Dr. Neo Cortex and N. Tropy from taking over every dimension! To do so, Crash and team will have to spin and bounce on enemies, collect Wumpa fruit and take on powerful bosses. Crash Bandicoot 4: It’s About Time uses the same platforming mechanic its predecessors are well-known for, with updates like wall running, rope swinging, rail grinding and ziplining. There are even new masks to wear! Ika-Ika, Kapuna-Wa and Lani-Loli are Quantum Masks that will help Crash in different ways throughout the game, like flipping him upside down to walk on ceilings or phasing boxes in and out of existence. Take on Cortex…and even play as him…then save the dimension!