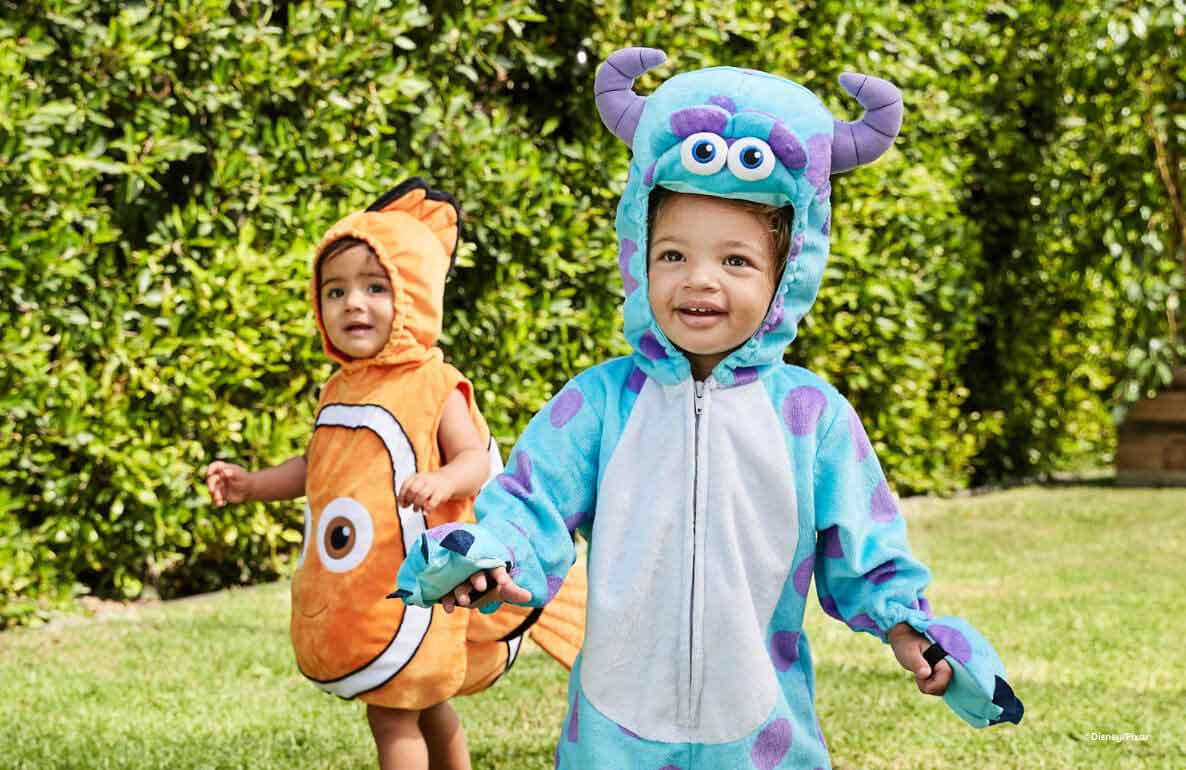 Disney and Pixar movies hold a special place in just about everyone’s heart. And what’s not to love? There are so many wonderful lessons to take from the movies like the importance of family, friendship, loss and self-acceptance…just to name a few. Pixar Fest gives us the perfect opportunity to relive some of our favorite movie memories and make some brand-new ones with the family! What better way to celebrate than with toys and costumes featuring their favorite Disney and Pixar stars. Zoom, swim, roll or just scroll down to learn more about some awesome Disney and Pixar fun-makers!

Scare and tell lots of jokes as their favorite green monster! The Disney Pixar Monsters University Mike Toddler Costume is an adorable recreation of the beloved Disney and Pixar character. The comfy costume includes green pants and a green top, complete with Mike Wazowski’s face and iconic one eyeball! Top off the look with a Monster’s University cap and they’re ready for some monstrously fun tricks and treats!

The classic card game gets a Disney and Pixar twist with UNO Pixar 25th Anniversary Card Game! The rules are almost the same, so hold onto those reverse cards, and challenge players with the “Pixar Pop Quiz!” wildcard where they’ll have to name five Pixar characters and draw cards. The UNO Pixar 25th Anniversary Card Game comes in a special edition tin to keep the cards looking great for lots and lots of rounds! They can find their favorite Pixar characters on each card, so play along with Nemo, Alfredo Linguini, Wall-E, Flik, Carl Fredricksen and more!

Put it in O, for Onward! The Disney Pixar Onward: Barley Action Figure features Barley Lightfoot in great detail as he goes on an epic quest to see his father again. Barley’s look includes a beanie, green shorts, sneakers and his iconic sleeveless denim jacket including patches and pins seen in the movie. Barley also comes equipped with Corey the Manticore’s sword, ready to do battle with the Curse Dragon! Big adventures await, so grab the older Lightfoot sibling and let their imaginations take them on a legendary mythological trip!

Warm up then race with the Disney Pixar Cars Rust-Eze Double Circuit Speedway Playset! Send Lightning McQueen on some practice laps at different speeds using the motorized booster. When it’s time to race, flip the divertor to open up a whole new section of the course, where Lightning McQueen can drift and jump to victory! The playset includes a Lightning McQueen vehicle, and they can add some of their other favorite characters for head-to-head action! There’s high-speed fun around every turn and it’s a great way to turn playtime into a blur!

It’s time for some hilarious makeovers! Mr. Potato Head Disney Pixar Toy Story 4 Mini 4 Pack gives the classic toy and iconic character some silly wardrobe options to dress like Buzz Lightyear, Woody, Ducky and Bunny. This set is great for little ones exploring their curiosity and imagination! They can remove and replace accessories from characters to create silly outfits and create blends of characters like Mr. Po-Woody Lightyear! There’s no wrong way to play and the pieces are sized just for their little hands. There’s so many creative possibilities and ways to play!

Wall-E is a robot of few words, but lots of moves! The Disney Pixar Wall-E Remote Control Robot brings the loveable robot to your home and places his movement in their hands with an easy-to-use remote control. As they move him forward or backward, Wall-E’s arms will move and he’ll light up and speak. When they want to turn him around, they can just use the remote control and Wall-E will perform a J turn to change course. When they just gotta hear their pal speak, they can press the button on his front to activate one of 20 sound and light combinations! Wall-E comes to life and is ready to play. Where to? Wherever they want!

Never underestimate the power of music. With the Disney Pixar Coco Guitar, they can seize their moment and play their hearts out, just like Coco! The toy guitar is modeled after the one played by Ernesto de la Cruz and feels like a real guitar. Strum along and learn hand placement for eight guitar chords using the easy-to-follow chart, then watch them get excited as they bring the power of music to life! Open up the songbook to learn four traditional songs from Mexico and watch the guitar react as they play! The Disney Pixar Coco Guitar lights up and the skeleton’s mouth opens and closes as they press down on the notes. This is a great way to introduce them to the power of music and inspire them to learn more about the guitar!

This fish is out of water but filled with fun! The Disney Pixar Finding Nemo Plush is a super soft and cuddly recreation of everyone’s favorite Clown Fish. He’s bright and comes ready to play with a smile as they bring Nemo along on all they playtime adventures. Whether they’re watching Finding Nemo, playing or getting ready for bed, the Disney Pixar Finding Nemo Plush is right there by their side to make every day even more special!