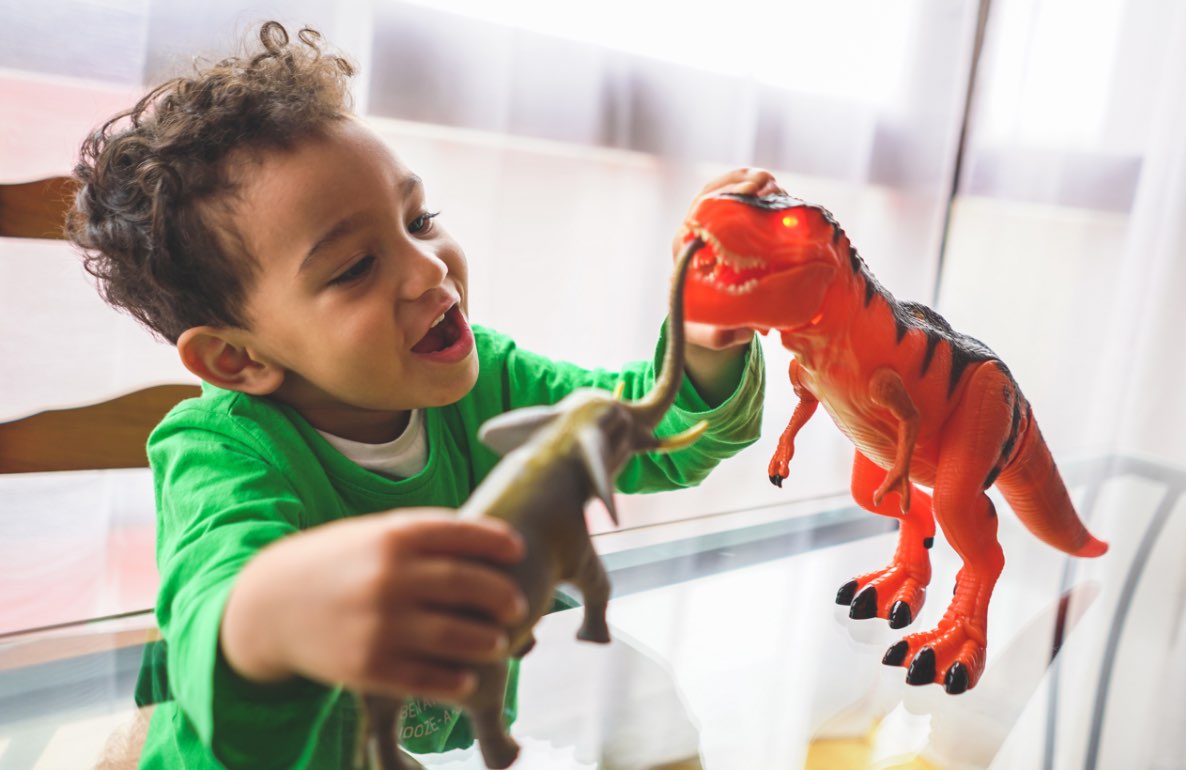 The fastest thing alive is slowin’ down just long enough to play. The Sonic the Hedgehog 4” Super Sonic is modeled after our hero after he collects all the chaos emeralds and transforms into the unstoppable Super Sonic! There’s no way Dr. Robotnik will get away with his evil plans when Super Sonic is chasing him! He comes with bendable limbs for different poses and play styles, and includes an accessory disk that can be spun or unfolded to reveal an 8-bit Sonic! When they gotta go fast, there’s no better play pal to have around than Sonic the Hedgehog!

There’s nowhere to hide when the Indominus Rex is after you! Take control of the Jurassic World Dino Rivals Destroy ’n Devour Indominus Rex and unleash the beast on any unlucky action figure that catches its eye. Press a button on the dinosaur’s tail and he’ll open his mouth wide to reveal vicious teeth and gobble up an action figure as it makes roaring sound effects. An LED light gives the Indominus Rex a scary red glow as it chomps away. The button on its back moves its arms and makes more sound effects to scare other predators away. With the Destroy ’n Devour Indominus Rex, chaos plays free.

The man who made Marvel possible, behind the myths of beloved superheroes known around the world, the legendary comic book writer: it’s Stan Lee! The Marvel 6” Stan Lee Figure honors the creator of the Avengers (among many, many other heroes) with a poseable action figure and look inspired by his cameo in The Avengers movie. Stan comes with Captain America’s shield with his signature and a chess board. He joins the ranks of many other Marvel 6” action figures including Captain America, Spider-Man, Iron Man and more. Celebrate the man behind the Marvels and introduce the creator of so many superheroes to their next action-packed play time.

Relive the glory of 1990s wrestling with the WWE Retrofest Mr. Perfect action figure. Known for his Perfect-Plex, the Mr. Perfect action figure features deluxe articulation to master every move in the ring. The figure is inspired by the WWE Survivor Series 1992 and includes lifelike facial authenticity through TrueFX. Mr. Perfect comes with an Intercontinental Title and a towel. Pull out a swinging knee lift, toss in a rolling neck snap and create the Perfect way to play like a WWE star.

The year is 2025, Earth is under threat by the Troobian Empire but there’s still a load of play to have! The Power Rangers Lightning Collection 6” Power Rangers S.P.D. Shadow Ranger Collectible Action Figure (whew!) features 20 points of articulation and details inspired by the hit show. Take control of Anubis “Doggie” Cruger with two changeable heads: his regular helmet and without a helmet as Anubis Cruger. His shadow saber can strike down any baddie, and two different sets of hands change the fun to fit their style of play. Earth needs help and the Power Rangers S.P.D. need to save the day. With Anubis on the case, we’re in good hands…and more hands.

When they need heroes and villains all at once, the Nano Metalfigs Marvel Die-Cast Figures 1.65” 20-Pack collection has them covered! Take on Carnage, Thanos and Venom with heroes including Captain America, Spider-Man, Star-Lord, Wasp and more. The 20 figures are 100% die-cast metal for extended play. Let heroes unite to take on really bad guys or add ’em to the mix of their collection of action figures for more storylines and ways to ignite their imagination.