indoor family games for all ages 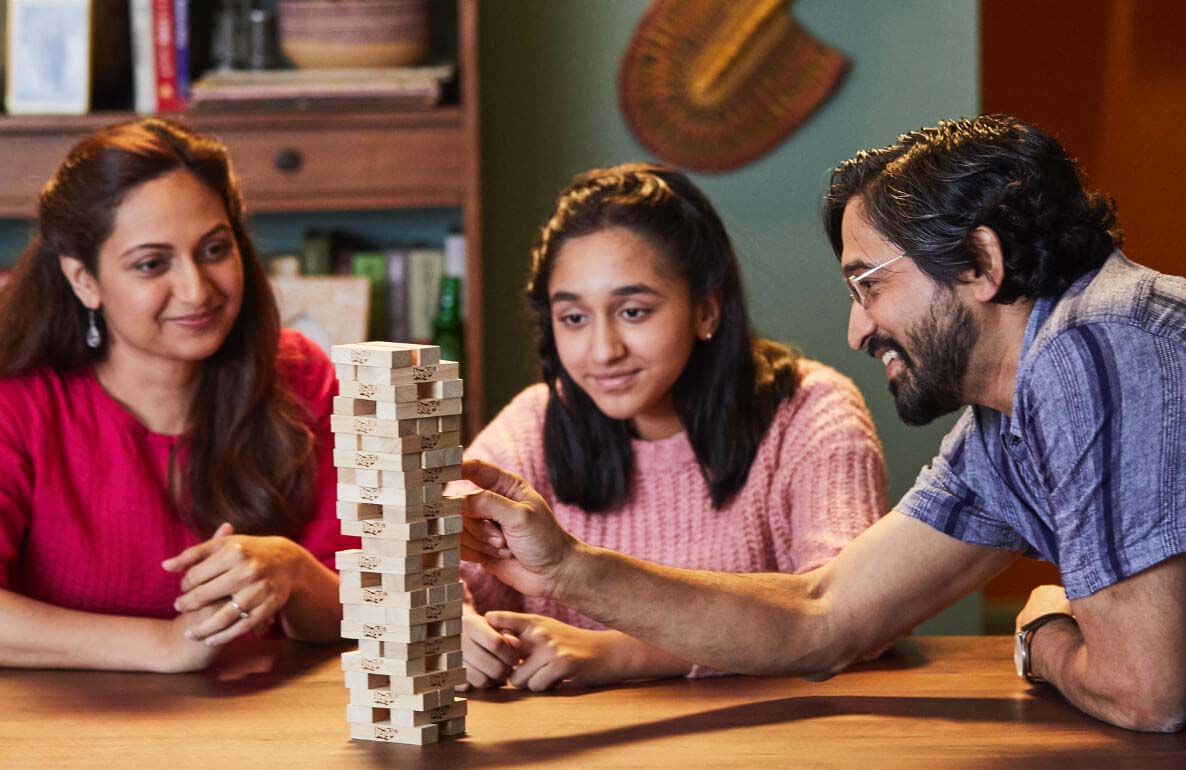 Staying indoors doesn’t mean they have to stay bored…but they can keep board! We’ve found lots of board games, card games and fun family games to fill the day with giggles, laughs and gasps. Clear the table and make way for fun that’ll last all day long! We’ve made sure to include games for every kind of kid, too, so take a look and explore an assortment of games they’ll love.

We should first start by saying that no cats were harmed in the making or playing of Exploding Kittens. Ok, with that out of the way…the goal of Exploding Kittens is to be the last player to explode! From kittens! Players will draw, discard and steal hilarious cards featuring Taco Cat, Hairy Potato Cat and way more. If they draw an Exploding Kitten card and don’t have a defuse card to prevent cat-astrophe, then they’re out! The last player left standing wins! This hilarious game is easy to set up, easy to understand and easy to play. Get the whole family together and take turns (or two) finding pairs, collecting defuse cards and lettin’ the fur fly!

It’s classic, it’s thrilling and it’s SO much fun! Jenga is the timeless game of balance and strategy. Need a quick refresher? It’s so easy to play! Stack the Jenga blocks into a tower shape and take turns removing one block and placing it at the top. Keep going, try to make it unsteady for the next player and keep going until the tower falls over. Jenga blocks are made from hardwood, so they can topple again and again. Ready for excitement? Set up the Jenga tower and watch ’em all fall down!

What Do You Meme? Family Edition - The Hilarious Family Game for Meme Lovers

We all have our favorite memes, and now the family can make all new ones with What Do You Meme? Family Edition. Each player receives caption cards that they’ll use on one picture card per round. A judge per round will choose their favorite caption, awarding that player the photo and caption cards. You can choose how many rounds are needed for victory, or just play until everybody’s face hurts from laughing! What Do You Meme? Family Edition includes 300 caption cards and 65 photo cards so there’s lots to laugh about and SO many rounds to play!

A certain show got loads of people interested in Chess…and we couldn’t be more excited! A game of strategy, skill and intelligence that takes minutes to understand and a lifetime to master. No Stress Chess provides a great introduction to Chess with a double-sided board: one side for beginners and the other for players ready to master the board. No Stress Chess means it, too! Flip cards and move the piece indicated to learn how to play, where pieces can move and how the game is played. They’ll get a gradual introduction with several levels of difficulty that will ultimately introduce players to standard Chess!

We loved playing Candy Land when we were kids and your kids will, too! Go on a super sweet adventure with gingerbread men pieces that move from color to color as your little ones flip cards. They’ll meet the Duke of Swirl, pass Licorice Lagoon, stroll through Lollypop Woods and more. Use shortcuts to their advantage or get stuck in Molasses Swamp! There’s so much variety and even more color in Candy Land. It’s a great game for the younger kiddos and it doesn’t require reading before play!

Hooray! Peppa Pig, George Pig, Mummy Pig and Daddy Pig are ready to teach your little ones how to play a classic board game in Monopoly Junior: Peppa Pig Edition. Players can choose their piece, roll the dice and make their way around the board to purchase properties like Peppa’s House, Grandpa’s Garden, the Zoo and Potato City. They can practice counting with pretend money and try their best to collect the most cash and win! Monopoly Junior: Peppa Pig Edition is designed to be fast paced so they’ll want to play again and again! What do you get when you mix Peppa Pig with a board game everybody loves? LOTS of fun!

All abord! Ticket to Ride: Europe - First Journey is a great way for younger players to get to know the classic game with a new map that features major cities in Europe. Claim routes, complete Tickets, earn bonus Tickets and claim the Golden Ticket to win! They’ll have lots of fun connecting trains between major cities, learning about geography and learning the game as they go! Ticket to Ride: Europe - First Journey is easy to learn and easy to play. They’ll want to come back again and again to take another ride and earn Tickets!