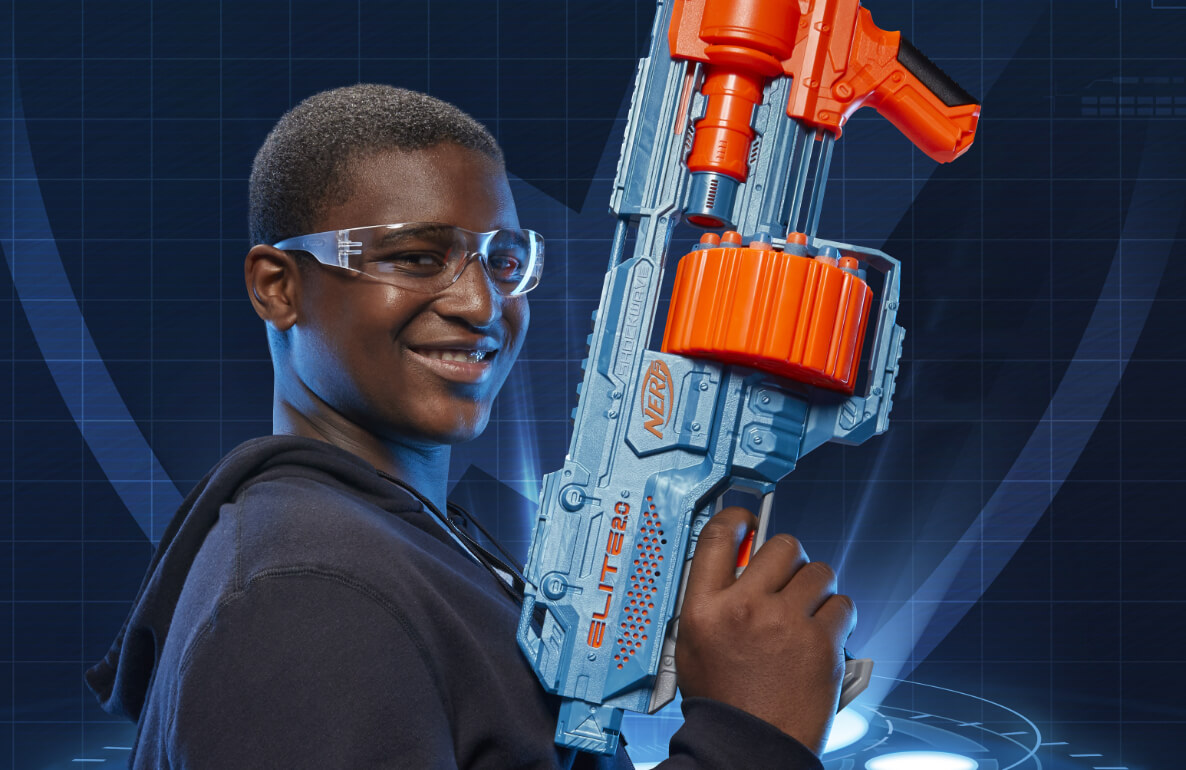 These are a real blast! Nerf blasters get the kiddos outside, runnin’ around and aiming at targets to help develop their fine motor skills. The best part is that these Nerf blasters are just too cool, from their design to usage! See for yourself. The collection below combines launch power, awesome rates of launch and even some modeled after their favorite video game series and TV show to bring them to faraway galaxies…right in the backyard!

When they hear this Echo, they’ll wanna run in the opposite direction. The Nerf Elite 2.0 Echo CS-10 Blaster goes wherever the battle is and adapts to meet any challenge. The customizable features of the blaster convert it from small blaster to big timer with the addition of a removeable stock and barrel extension. Load up the 10-dart clip and launch ’em up to 90 feet in the air, with 14 more included Nerf darts ready for quick reloads. The rate of dart launch is up to them, too. The Nerf Elite 2.0 Echo CS-10 also features slam fire! Move the priming slide backward and forward, then press to fire a single dart. Need a little more rate of fire? No problem! Just hold down the trigger and watch those Nerf darts come flyin’ out. There’s just nothing quite as satisfying as hearing one’s own Echo…

A trusty blaster for any battle, the Nerf N-Strike Elite Mega CycloneShock Blaster is small enough for any kid to handle but still packs a punch! The rotating drum can hold up to six Nerf Mega Darts that launch up to 90 feet. And there’s no need to be silent with the CycloneShock. The included Mega Whistler Darts scream as they fly through the air and let the competition know what’s headin’ their way. This versatile blaster is a good way to quickly end any backyard battle or just play around with. The Mega Whistler Darts are loads of fun and will have them loading up all afternoon!

Straight from the hands of Master Chief, the Nerf Halo MA40 Motorized Dart Blaster is ready to blast away Covenant or any intergalactic baddies that dare cross their path. The motorized blaster holds 10 Nerf darts in the clip and comes with another 10 for quick reloads to keep those grunts running. Modeled after the MA40 used by Master Chief in Halo Infinite, the MA40 Blaster includes a rail riser that attaches to the blaster’s tactical rail, allowing your little super soldiers to customize the MA40 with even more Nerf accessories, sold separately. Bring the play to the game with an included game card with a code to unlock a digital asset in Halo Infinite. Whether they’re holding a controller or the Nerf Halo MA40 Motorized Dart Blaster, they’ll feel the power of Master Chief.

This is the way. The Nerf Star Wars The Mandalorian Rocket Gauntlet can strap this blaster onto their wrist for some extra fire power and an excellent exit strategy should things go a little different than intended. The design is suitable for Mando himself, and it’s super easy to use! Just load a Nerf Elite dart into the gauntlet and press the button to launch it. The Nerf Star Wars The Mandalorian Rocket Gauntlet comes with six Nerf Elite darts, with storage for two extra Nerf Elite darts on the gauntlet itself. Whether they’re protecting The Child or just making a daring entrance…or getaway…this Nerf gauntlet is a perfect companion piece to other Nerf blasters.

Need to quickly clear the area? Look no further than the Nerf Perses MXIX-5000 Rival Motorized Blaster. Load up the hopper, pop in the rechargeable NiMH battery and let loose up to eight rounds per second! The hopper can hold up to 50 Official Nerf Rival rounds and launches them up to 100 feet per second. The Nerf Perses MXIX-5000 Rival Motorized Blaster features a quick reload and trigger lock, so they won’t accidentally clear the hopper before it’s time to unload. When it’s time for battle, just press the acceleration button to power up the motor then pull the trigger. See that? That’s what it looks like to have some serious Nerf power in their hands. And it feels good.

They’ve got the blasters of their dreams. They’ve got targets. They’ve got friends on the way for an epic backyard battle. Want to make sure they come out victorious? The Official Nerf Tactical Vest N-Strike Elite Series lets them get even more immersed in play and gives ’em space to keep loads of Nerf darts for a steady stream of fun. There are holders for four dart clips and loops to hold 12 Nerf Elite darts. There’s an accessory pocket for more darts, Rival rounds or anything else they need to give ’em an edge. Plus, there’s room for a backup blaster in the storage pocket! Along with the tactical vest, they’ll also get two six-dart clips and 12 Official Nerf Elite darts. Just put it on, adjust to fit and let ’em loose. With that many rounds, they’ll be ready for a long, long battle.